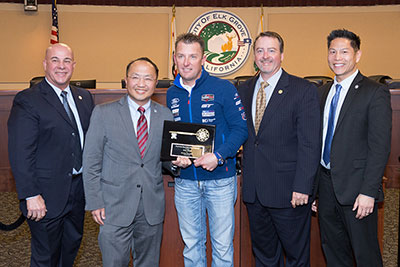 Widely considered one of the best road racers in the world, Joey Hand, with co-drivers Dirk Mueller and Sebastien Bourdais, won both the GTE Pro category at the Le Mans 24 Hours in 2016 and the GTLM title at the Rolex 24 At Daytona in 2017. Both races are widely considered the pinnacles of 24 hour sports car endurance racing. Joey currently drives the No. 66 Ford GT in his fourth full-time season with the Ford Chip Ganassi Racing Team in the IMSA WeatherTech SportsCar Championship series, the highest level of North American sports car racing.

Joey grew up in the Elk Grove area, attending James McKee Elementary School, Kerr Middle School and Elk Grove High School. He started a karting school at the age of 17, owned a kart shop in Elk Grove and the concession of the kart track at Prairie City SVRA for 4 years. When he's not on the road, Joey is at home in Wilton with his wife Natalie and their two children.

Joey's 2019 racing schedule started at the Rolex 24 At Daytona in January and will continue through the entire IMSA WeatherTech SportsCar Championship schedule, which includes a stop in northern California on Sept. 13-15 in Monterey, with plans to return to the 24 Hours of Le Mans in June. For Joey Hand racing news follow him on Facebook , Twitter or visit joeyhandracing.com .