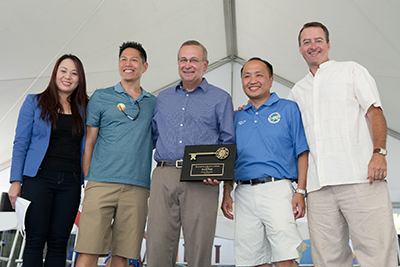 Major General Donald Ralph retired in 2015 as the Mobilization Assistant to the Commander, Air Force Special Operations Unit based at Hurlburt Field, Florida. He was the principle advisor to the Commander for all reserve component matters and oversaw reserve force readiness, integration, operations, and mobilization in times of crisis and war.

General Ralph entered the Air Force in 1980 as a graduate of the U.S. Air Force Academy. He served as a C-130 advanced flying training instructor pilot, followed by an Air Staff Training assignment at the Pentagon. He was selected initial cadre aircraft commander to fly the B-1B bomber at McConnell Air Force Base in Kansas. He attended the U.S. Air Force Test Pilot School and served as an instructor, flight examiner and operations officer of a tactical airlift squadron. He commanded the 53rd Weather Reconnaissance Squadron, the world famous "Hurricane Hunters." In his civilian occupation, he was an international captain on the B-767 for a major airline.

But, long before military awards and accolades like the Distinguished Service Medal, General Ralph attended Pleasant Grove Elementary, Joseph Kerr Middle School, and graduated from Elk Grove High School in 1974. Our resident historian Elizabeth Pinkerton, who nominated General Ralph for this honor refers to him as one of Elk Grove's "Supergrads." And many of the members of his family still call Elk Grove their home.