The Ridge Shopping Center and Costco

The Ridge Shopping Center and Costco

The City received two applications in fall 2015 from Pappas Gateway, L.P. and Costco Wholesale requesting approval of various Planning permits (referred to as entitlements). If approved, the two interrelated projects would develop the approximate 40 acre property located at the southeastern corner of Bruceville Road and Elk Grove Boulevard. 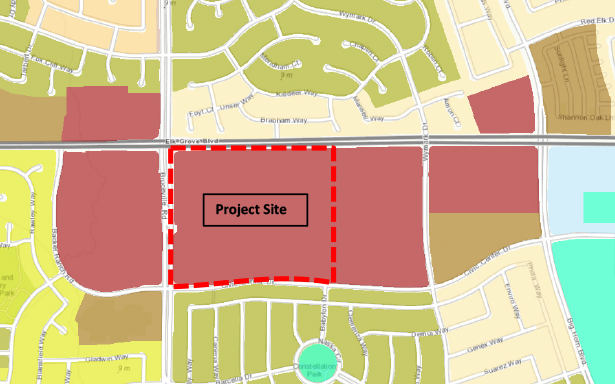 The Ridge Shopping Center was approved by the Planning Commission on May 5, 2016. The Ridge Shopping Center encompasses 24 acres of undeveloped property and proposes to develop up to 226,000 square feet of commercial space. Large Major Tenant spaces are planned in the southwestern portion of the Project site, facing Elk Grove Boulevard. The multi-tenant retail building for the three Junior Major tenants is centrally located, providing a visual barrier of the proposed Costco Fueling Center from Bruceville Road. The site plan also includes fourteen individual pad buildings, of which six buildings may include drive-through facilities. The eight remaining pad buildings will house a variety of commercial tenants. Parking has been provided above the minimum Code standards in order to accommodate the greatest flexibility in a given future tenant mix. 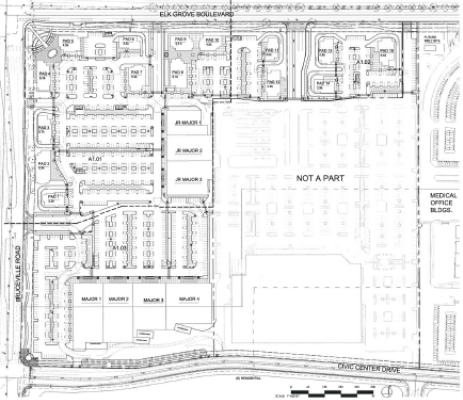 The Costco Wholesale was approved by the City Council on July 13, 2016. The approval included a 150,000&plusmn; square foot warehouse store and a 30 pump island fueling facility on approximately 16 acres immediately adjacent to The Ridge Shopping Center. Costco has been designed to effectively be a part of The Ridge Shopping Center with vehicle and pedestrian cross access provided on all sides of the building. 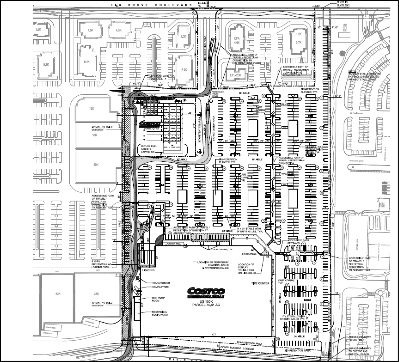 The Ridge and Costco are proposed on property identified in the City'sGeneral Plan(the long-range master plan for the City) and theLaguna Ridge Specific Planfor commercial-retail development. The property has been zoned"Shopping Center (SC)" Commercial. As such, the City's review at this stage is on the design (e.g., architecture, landscaping, lighting, amenities) and operation (e.g., screening from adjacent retail, limitation of noise, truck traffic routing) of the proposed shopping center.

UPDATE:On December 29, 2017 the Project pulled construction permits. Work at the site and on the related infrastructure improvements is expected to begin in January 2018 with a grand opening in summer 2018.